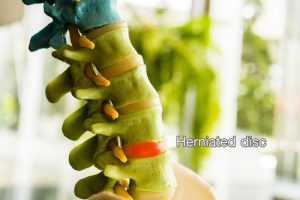 I hurt my back in August of 2006. I was told to throw iron that was too heavy and herniated 2 discs. The first surgery I had was just to shave the discs off so they wouldn’t be pushing into my nerves. That didn’t work at all. The second surgery I had was to remove the discs and put screws and bone graft into my spine. It was a terrible experience from the start. That experience scared me of another surgery so bad that I would almost have rather lived with the pain than to have another. My doctor released me after he thought I was healed and told me I was just having muscle pain and there was nothing more he could do. I was told at work that I was fine, they thought I was basically making up the fact that I was still in severe pain. They said it was either muscle pain or something I would just have to live with. I asked for another opinion and was told by the Cat doctor that they would get me another opinion, but I needed to be physically, and mentally prepared to find out that there was nothing wrong with me.

Dr. Kube was recommended to me very highly. He looked at my MRI and saw the problem immediately. I had micro movement in my lower fusion because it hadn’t healed like it was supposed to. The bone graft from my last surgery had grown into my nerves and was causing horrible pain. Even though he couldn’t promise that he could fix my back completely, he assured me that he would do his very best to alleviate most of my pain. After the experience I had had with the last surgery I was very apprehensive, but my quality of life had deteriorated to the point that I was desperate for help. I had surgery on June 17th and I’m already able to do things that other people take for granted, but it means the world to me. I got to take my granddaughter fishing for the first time. I couldn’t walk uneven ground before without getting jolting pains that would bring me to my knees. I still have permanent nerve damage and will always be in pain because of my 3 year ordeal, but I feel I can lead a much better life now than I have since the injury. I have never been treated better than Dr. Kube and his nursing staff treated me. I already have, and would refer anyone with back problems to Dr. Kube.