Lumbar Total Disc Replacement vs Fusion: Which to Choose 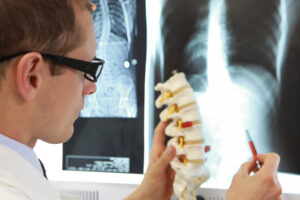 There are generally two potential fixes for degenerative disc disease. However, between a total disc replacement or a fusion, professionals tend to lean towards one more than the other. To learn more about the procedures and why one is more often preferred, continue reading.

For close to two decades, many experts have asserted that lumbar total disc replacements (TDR) should be provided more often as treatment for degenerative disc disease. Yet many doctors still rely on the more widely adopted and traditional lumbar spinal fusion.

Why is that? If you wanted a TDR, would you be able to get one? And will insurance pay for it? Here’s what you need to know about TDR vs. fusion before you go under the knife.

For much of the late 20th century, the traditional fix for lumbar back pain was spinal fusion. In that procedure, a surgeon places a bone graft between two or more vertebrae, which eliminates painful or dangerous movement.

But over the early course of the 21st century, treating degenerative disc disease (DDD) with TDR increased nearly three times. TDR is technically more demanding than fusion; it completely replaces a worn out, even totally degenerated disc, with one that’s metal and/or plastic.

Certain studies show extensive benefits. As one in 2017 put it, “Lumbar TDR surgery was a safe procedure with overall low complication and revision rates, significant improvement in health-related quality of life…scores, and high rates of successful outcomes. Moreover, there are reports that mobility is preserved… .”

Richard Guyer, MD, is co-founder of the Texas Back Institute in Plano, TX, where he and colleagues have provided over 4,000 TDRs since the year 2000. He says, “We believe that in the right hands, at a center of excellence, the artificial disc can give prolonged and predictably very good results.”

Why Would I Need a Disc Replacement?

Low back problems hit more than a third of our population (about 38%) and it’s recognized that aging is undoubtedly a risk factor. Guyer actually thinks the term degenerative disc disease, should change. “It’s [really] not a disease; it’s a natural aging process,” he points out.

One 2018 study explains fusion’s results as “eliminating motion at the affected segment [which] changes the [spine’s] mechanics…and [places] increased stress on neighboring segments.”

That lack of motion does have another benefit—it eliminates pain. That’s something TDR’s increased mobility can’t fully address. It can “only relieve pain generated from the disc, but not other sources.”

But Dr. Guyer admits TDR is a much more time-consuming procedure. “Unlike fusion…[for TDR] there’s a lot of decision-making…and a lot of prep time. [You’re] looking at the X-rays of the discs above and below, making sure you choose the right size. [So let’s say] the patient has a narrow disc space. You have to mobilize [that space] back to normal height; you can’t make it too high [or] too short,” he points out. Then to finish, your surgeon must make sure he or she has the disc anchored properly.

Despite all of TDR’s benefits, a 2017 study noted five reasons why fusion is still the option most surgeons choose:

This is the final obstacle the 2017 study mentioned. Yes, new products face challenges, but TDR’s been around 20+ years. The oldest of the “newer” models Dr. Guyer mentioned was approved in 2015.

Dr. Guyer says, “We’re now at about 85% of insurance coverage,” and admits that’s a great improvement from when he and others did that 2013 fusion versus TDR study. But the reimbursement to surgeons is still an obstacle. “Say you got reimbursed X for [traditional fusion surgery]; for TDR you get a fraction of that!” Dr. Guyer noted, adding the extra work in trying to get insurance reimbursement, “You say, ‘I’m just going to do a fusion.’”

Luckily, relatively few folks with back problems ever need a total disc replacement. And before undergoing either fusion or TDR, patients need to explore non-surgical therapies, ranging from NSAIDs to physical therapy, massage, and other rehab. Lab tests will also be needed.

Once an operation is deemed necessary, bring inquiries about both procedures. Younger people with DDD should question TDR’s long-term protection, since the durability even of the newer discs isn’t yet that well-known.

Finally, if you meet a surgeon who insists that fusion is your only option, ask why TDR can’t be considered. If your surgeon sharply dismisses TDR…sharply dismiss that surgeon and find another.

What to Expect When Becoming A New Patient
February 1, 2023

A Look at the Benefits of Standing Desks
January 9, 2023