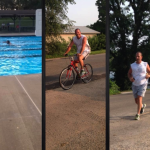 “I am now almost 2 years past surgery and it has changed my life. I completed a triathlon and ran several 5k races. Pain is gone and I’m living my life again.”

Meet John Kachanuk. He has been a patient of Prairie Spine & Pain Institute for the last few years and is a prime example of what can be achieved using minimally invasive surgical techniques for the spine.

John is a firefighter, active family man and recreational athlete. A few years ago, he started to have severe back pain that was affecting his job and his ability to participate in several of the activities he enjoys. “Before my surgery, I couldn’t do very many things like walking, sitting or sleeping without pain.” John said. Eventually, he sought help from the care team at Prairie Spine & Pain Institute.

“We initially evaluated John, and provided treatment that allowed us to hold off surgery for over a year,” says Dr. Richard Kube. He added, “Ultimately, John worsened over time and was out of options other than surgery. I suggested a minimally invasive fusion as the best chance for him to return to the life he desired.”

John was able to undergo a minimally invasive fusion which was actually performed as an outpatient procedure. He went home the same day. Once he started physical therapy, John was able to rebuild his strength and return to duty as a firefighter.

John is now two years out from his surgery and continues to do well. He shared some recent photos that were taken as he competed in a local triathlon. He is now active as ever and happy with his outcome and the care he received.