Who is a Candidate for Cervical Disc Replacement Surgery? 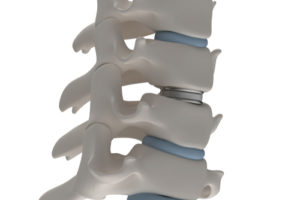 Who is a candidate for cervical disc replacement surgery and what are the risks?

Cervical disc replacement is used to treat symptomatic cervical disc disease that has failed to improve with nonsurgical care. While in most cases disc replacement (arthroplasty) can be used instead of an anterior cervical discectomy and fusion, there are situations where arthroplasty is not an option. Currently, in the United States, disc replacement is only approved for use at one cervical level and is not approved for use adjacent to a previous cervical fusion. The procedure should not be performed in children or when there is abnormal motion or instability at the affected level. Advanced degenerative changes known as spondylosis affecting the facet joints in the back of the spine at the affected level also precludes the use of a disc replacement device. A disc replacement device should also not be used in the presence of significant osteoporosis or an active infection. It is important to note that cervical arthroplasty is a newer and technically challenging procedure whose exact indications continue to evolve. Patients will need to see a qualified spine surgeon to discuss whether disc replacement is an option for their specific condition.

The risks associated with cervical disc replacement surgery are very similar to those associated with an anterior cervical discectomy and fusion. Nerve injury is extremely rare, but is a potentially catastrophic complication of this and most other spinal surgeries. Bleeding is usually very limited with cervical disc replacement and the risk of infection is also low. Swallowing difficulty is common with any anterior cervical surgery, but in most cases is self-limited. Technical difficulties related to placement of the disc replacement device including an incorrectly positioned implant or movement of the device following implantation is possible and could require revision surgery. Spontaneous fusion across the disc replacement level has been reported, but does not typically require treatment.

Many physicians and patients have expressed concern over whether the disc replacement device will wear out over time. Fortunately, unlike hip and knee replacements, this has not been found to be the case with cervical arthroplasty devices. This is likely because the stresses applied to these implants are significantly less than those seen in other joints such as the hip and knee. Additionally, the biologic environment of the disc space is quite different than that of the joints found in the extremities. Many other potential complications to the procedure do exist and a thorough discussion with your surgeon is mandatory before considering this or any other surgical procedure.

The success rates for Cervical Disc Replacement are generally good and the recovery is typically a little quicker than for fusion. The surgery serves to improve pain and function and prevent further neurologic deterioration. Most patients are noted to have gradual improvement of their pain and function following surgery. Most patients will not notice any loss of neck range of motion.

Click here for more information about Cervical Disc Replacement offered at Prairie Spine or call our office to schedule an appointment.