‘iPosture’ Blamed for Surging Back Pain Among Young Adults 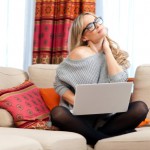 84% of 18 to 24-year-olds reported experiencing back pain during the past year, according to a survey conducted by U.K. health provider Simplyhealth. Young adults lost 1.5 more days of work on average due to back pain than older adults.

Slumping shoulders, a slouching middle and a lower back that’s constantly compressed from sitting: It’s being called iPosture, and it isn’t pretty.

Being hunched over smartphones and tablets for most of the day is leaving young adults with more back pain than their elders.

In the survey, conducted in September among 3,000 adults, 84% of 18 to 24-year-olds reported experiencing back pain, especially lower back pain, in the past year. The results also showed young adults lost 1.5 more days of work on average due to back pain than older age groups.

“It is likely that slumping and hunching over computers and hand-held devices is a contributory factor in the different types of back pain reported by different generations,” Hammond said. “Younger people are far more likely to be hunched over a device on a sofa, and would benefit from paying close attention to the basics of good posture.”

While millennials spent an average of 8.83 hours in front of their digital devices each day, the over-55 set also showed signs of screen overload, at 6.64 hours.

Back pain is a common reason for decreased activity levels in young adults, according to the National Institutes of Health. Eight in 10 people will complain of back pain at some point in their lives.

Low back pain can be prevented by maintaining correct posture while sitting, standing and sleeping, exercising regularly, maintaining a healthy weight and avoiding stress, which may cause muscle tension.