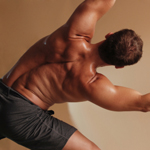 Yoga, which originated in ancient India, is built on three main structures: exercise, breathing, and meditation. It has become popular as a system of physical exercise across the Western world, and practitioners believe that the daily practice of yoga has both mental and physical health benefits.

In the study, published in Evidence-Based Complementary and Alternative Medicine, researchers at Boston University School of Medicine (BUSM) and Boston Medical Center (BMC) showed the benefits of yoga for chronic back pain in lower income minority patients.

While previous studies have shown that yoga can be an effective treatment for chronic lower back pain, few studies have studied this among specific populations.

Lower income patients often have worse lower back pain due to limited access to both mainstream health care treatments and complementary treatments such as yoga, massage and acupuncture, said first author Robert Saper, MD, MPH, associate professor of family medicine at BUSM and director of integrative medicine at BMC.

In this 12-week randomized trial, 95 predominantly low-income adults suffering from moderate to severe lower back pain were divided into two groups. One group attended yoga class once a week and the other attended twice a week, and both groups were encouraged to practice the poses and techniques at home.

At the end of the 12 weeks, both groups of participants experienced similar and substantial decreases in their pain level and need for pain medications, but there was no additional benefit seen in those attending twice a week. Also, their ability to perform daily functions improved.

Given the similar improvement seen in once weekly yoga classes, and that once a week is more convenient and less expensive, we recommend patients suffering from lower back pain who want to pursue yoga attend a weekly therapeutic yoga class, said Saper.