Back Pain Is A Burden Around The World 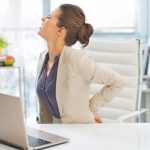 Back pain has taken over the World! The biggest cause of disability around the world is surprisingly banal.

The newest iteration of the Global Burden of Disease study, which tracks the prevalence of deaths and diseases worldwide, contains some good news: On average people are living about a decade longer than they were in 1980. But there’s a catch: Health hasn’t improved as fast as life expectancy overall, which means that for many, those long, final years are spent hobbled by illness and disability.

The nature of our old-age ailments has changed in recent years. The study, published this week in The Lancet and conducted by the Institute for Health Metrics and Evaluation at the University of Washington, uses a metric called “Disability Adjusted Life Years.” DALYs, as they’re abbreviated, combine the number of years of life a person loses if they die prematurely with the amount of time they spend living with a disability. Think of it as time you didn’t spend living your #bestlife—because you were sick or dead.

In rich countries, the number one cause of these DALYs is not surprising: ischemic heart disease, which is associated with well-known Western issues like high cholesterol and obesity. But the number two condition is a little strange: plain, old-fashioned, ever-present, low back and neck pain.

Even when you include poor and middle-income countries, low back and neck pain went from ranking 12th as a cause of DALYs globally in 1990 to ranking fourth in 2015, the most recent year. In most countries, it was the leading cause of disability. DALYs from low back and neck pain increased by more than 17 percent from 2005. The things that make us low-level miserable are now more likely to be simple aches and pains, rather than frightening, communicable diseases like diarrhea. That’s encouraging, but it’s still a little sad. People all over the world increasingly live long, great lives, only to spend their golden years slathered in IcyHot.

To find out why, I called Theo Vos, a professor of global health at the University of Washington and an author of the Global Burden study. He dismissed my first theory, that computers were causing our musculoskeletal issues. After all, in 1990 far fewer people spent their days glued to a screen, yet back pain was still a major problem. Plus, jobs in the service or agriculture industries are the most likely to cause back pain, the study found—not typing or texting.

This article was originally posted on Theatlantic.com.